From Comics to Book – Review of ‘DarkChylde’ by R. Queen

This Halloween I’ve received a copy of DarkChylde from the publisher, and it was yet another one of those books I was super excited to read, especially considering it was based on a comic book series (even though I’ve never read the comics).

The cover is incredibly eye-catching as you can see, so it’s not difficult to want to pick this book. It’s sad that it didn’t meet my expectations, but I guess it’s always harder when you have too many.

“If you love something, love it completely, cherish it, say it, but most importantly, show it. Life is finite and fragile, and just because something is there one day, it might not be the next. Never take that for granted.

Say what you need to say, then say a little more.
Say too much. Show too much. Love too much.

Everything is temporary but love.
Love outlives us all.”

“The last unicorn,” he affirms.

“You’ve never seen it,” I laugh over my shoulder.

On that I spin back, my hair less dramatic this time. “Have you read the book?”

Who should read it? Lovers of YA, Horror fans.

Would I recommend it? Not particularly.

The plot is not easy to dissect. You start with a basic premise – it’s about a young girl, Ariel, who is fighting her own nightmares – and you wait, patiently (very patiently) until it unfolds. The beginning, contrary to most books, actually hooked me. I liked the simple dynamics, the peculiar situation that was created to introduce us to the main character. There’s lots of potential there, and Ariel sounds like an interesting character indeed. At that point, if it kept the same tone and pace, it would be one of those books I wouldn’t be able to put down, no matter how busy my schedule (and believe me, it was quite busy). Unfortunately, the book lost me with the constant change of pace, characters, and environments. The more I read, the more I realized I wasn’t even curious to know what would happen next. In fact, I wasn’t even quite sure about what the hell was happening there. The writing style didn’t help (see more below). Overall, I couldn’t stop thinking how it all would have sounded in a comic book – and my conclusion is that I’d probably enjoy this story as a comic book in fact.

You get most of the story from Ariel’s point of view, thankfully enough, which makes you feel more connected to her than other characters. I thought she had lots of potential to develop, more in a realistic setting, rather than the actual fantasy /horror realm. The book has tried to play a balance between reality and fantasy, and it was nicely done in the beginning. Ariel feels more real when we start reading, and more distant (for me, at least) as we progress. All that feels real about this character is suddenly gone at some point.

The other characters didn’t create that much of an impact on me, but I’ll mostly blame the writing style and the sudden change of POVs.

We start with Ariel’s POV and it works really well as a first-person narrative – the writing is solid, beautiful, deep. We know what Ariel thinks, feels, and it all flows very naturally. It does put me off a tiny bit that everything is narrated in the Present tense since it all feels a bit urgent, but as long as we are reading Ariel’s POV, all is forgivable. Until we switch POVs. And not only POVs but also narrative styles and person. So when I come across a chapter that is actually narrated in the third person, but it’s not even a POV, or limited third, because you get to hear, feel and know what everyone else is thinking and feeling – so more like an omniscient overall – it’s automatically a letdown. I am positive I have started losing my interest in this book very early when I had to read this alternating omniscient POV that doesn’t make much sense and doesn’t help much in connecting you to the remaining characters. Head hopping, lots of use of passive voice for action bits (which made the action feel like description), shallow dialogues, among others, made me not want to keep reading. I did feel refreshed each time we got back to Ariel. The book and story were made to be narrated by Ariel, and I’d probably be writing a completely different review if that was the case. It also feels somehow that the book was written by two different people, or I’d just say the author is more comfortable writing in the first person because that’s what he excels at.

It has to be mentioned that the book cover is beautiful and I can’t wait to read and see the illustrations in the comic book series. So even if the book didn’t win me over, then at least, it convinced me to have a look at the comics.

Overall, DarkChylde didn’t quite match my expectations, but it’s still a book with an interesting concept and a strong main character. 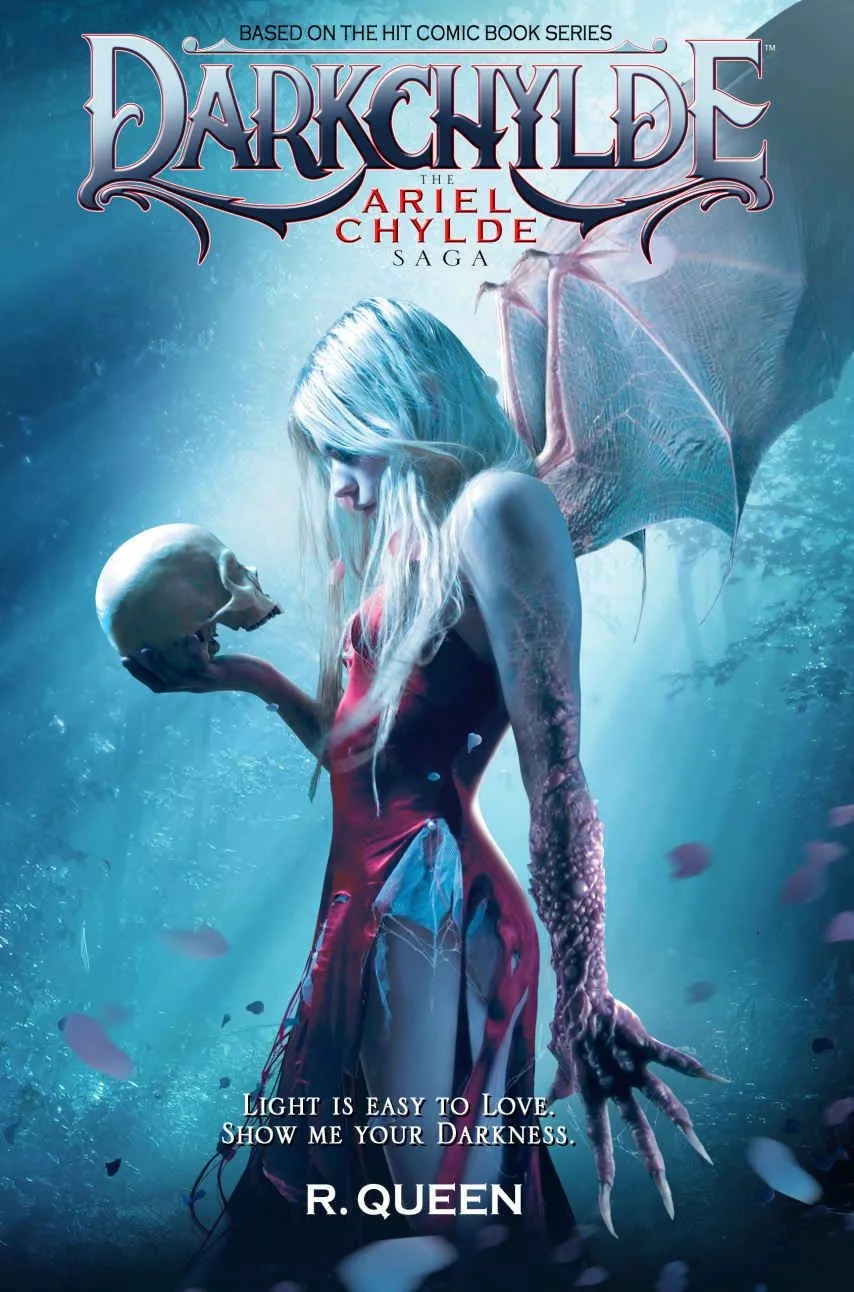 Ariel Chylde is haunted by horrible dreams, and on her eighteenth birthday sheds her skin as the nightmares emerge to act out her deepest, darkest impulses.

But before Ariel can save her small town from the terror of her dreams,
she must first save herself from the sinister secret of her subconscious.

A secret guarded by unspeakable evil.