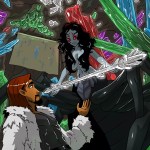 Today I am really excited to be interviewing P. Alexander, the editor for Cirsova Heroic Fantasy & Science Fiction Magazine, an independent self-published SFF anthology magazine focused on pulpy science fiction and fantasy in the style of Jack Vance, Robert E. Howard, Leigh Brackett and Edgar Rice Burroughs. Want to know how it all started?

1 – Let’s start by getting to know you a bit better. When and why did you decide to become an editor of an independent SFF anthology magazine?

Thank you very much for taking the time to talk with me!
I first started work on the magazine in mid-late 2015. Over the last couple years, my blog had been shifting from a gaming blog to a gaming and fiction blog, with a focus on older SFF stories, and I’d become enamored with the old Planet Stories pulp science fiction magazine.
I’d felt rather let down by some of the mainstream short sci-fi and fantasy fiction I’d been seeing up for and winning awards. There was a certain excitement to the older stories that I just wasn’t finding in a lot of what I was seeing. I thought to myself, the best way to encourage authors to write the kind of fiction I wanted to read was to offer money for it. Surely there were people out there who were writing weird and wild exciting stories in the vein of Leigh Brackett, Jack Vance or Robert E. Howard – I just needed to give those writers a platform.

2 – Who else has helped you in making this project come to life?
This sort of question always treads into dangerous territory, as someone is bound to be left out. The contributors are, needless to say, indispensable. I do need to give a special shout-out to Jeffro Johnson, though. I’d been a fan of his gaming content for some time, and his delve into the books listed in the Advanced Dungeons & Dragons Dungeon Master’s Guide’s Appendix N  is what really sparked my curiosity to check out a lot of the authors with whom I’m enamored today. He’s offered a lot of independent support for this project, and I’m thrilled to have him as a regular featured columnist.
Also, our cover artist, Jabari Weathers, is phenomenal. His art brings an exciting sense of weird to magazine and lends us a degree of class and shine that I couldn’t have dared hope for when I first considered starting an independent publication.

3 – What sets Cirsova Heroic Fantasy and Science Fiction Magazine apart from other magazines of the same genre?
A lot of science fiction and fantasy magazines these days are fond of cozy little pieces meant to either evoke a mood or affirm one’s social or political beliefs. Often these stories don’t go anywhere or are rather mundane stories with semi-fantastical trappings. Despite the promises of spaceships and exotic locales delivered by story titles and cover art, what you often have is little more than “Chicken Soup for the SFF Soul”. What we aim for above all else is a sense of wonder, excitement and adventure. And yes, sometimes a bit of romance. All of our stories are about heroes and heroics, dashing deeds of daring, or the wild and mysterious.

4 – Cirsova is known to focus on retro pulp fiction and feature material that isn’t often seen on mainstream magazines. What type of stories can the readers expect?
We have a lot of classic-style sword and sorcery, and some sword and planet stuff. We’re aiming to up the number of Raygun Romances we include, but we already have had a few really great ones. One of the goals of being a retro sci-fi publication is allowing for writers to go back and play in the sci-fi playground where the truly fantastical was an accepted part of science fiction.
While you may have spaceships with astronauts visiting distant planets, they’ll find everything there from talking apes with laser guns to sword-wielding space princesses.
One of our upcoming issues is taking a slightly different look at the Lovecraft mythos, featuring Edgar Rice Burroughs and Leigh Brackett style Planetary Romance adventure on an ancient Earth still inhabited by Lovecraft’s aliens.

5 – And what type of stories we won’t find on Cirsova for sure?

Stories with or about elves. Most people don’t know how to make them interesting, because most of what they know about them comes from either Tolkien or playing D&D. And if you do know how to make them interesting, there’s no point in calling them elves when you can make something unique and different.
You also won’t find many sprawling domain-type or dynastic-struggle fantasies of the Game of Thrones variety. Not only am I just not that interested in Epic High Fantasy, it’s not a subgenre particularly suited to the short fiction formats.

6 – How do you chose the theme for each issue? Is there a theme for issue #4 in mind already?
We’ve only done one ‘theme’ issue so far. Issue 3 had a ‘pirates’ theme, because we got several fun pirate stories, including one with space pirates. The theme for issue 4, if you can call it that, is simply the fact that it’s double-sized; we had so many great stories in our 2016 submission period that we had to double our page count for our winter issue to cram in as much as we could. Even so, we still had to turn away a few really good stories simply because we didn’t have the space.
Issue 5, which will be coming out in spring 2017, will be our second themed issue, focusing on stories written in the quasi-Lovecraftian Eldritch Earth setting mentioned above.

7 – Could you tell us a little about some of the authors and stories which have been featured already?
We have enough issues now that we’re starting to get a few ‘regulars’ and are even starting to see some emerging fan favorites.
Schuyler Hernstrom has been a regular for us since the first issue, contributing a short story, a novella and a flash piece in our first three issues. His style, more than any other contemporary writer I’ve read, harkens back to feel of a Vance or a Howard. It’s little wonder that there’s a steadily growing buzz around Hernstrom.
Brian K. Lowe is another regular, who contributed a really fun Raygun Romance story to our first issue (it had time-travel, a talking ape, and a girl who turned out to be some kind of future werewolverine) and a period adventure piece with a touch of Lovecraftian horror to our second. He’ll be featured in the upcoming Eldritch Earth issue with a pair of complementary pieces.
Misha Burnett had a fantastic novelette, A Hill of Stars, in our first issue, and he helped to organize the writing circle that has collaborated to create the Eldritch Earth setting and stories which will be featured in our 5th issue.
Adrian Cole has been writing SFF since the 70s and has resurrected his Dream Lords series to contribute a whole new cycle of adventures in that setting to Cirsova. Which is pretty freaking awesome!
S.H. Mansouri, who has written some for Grimdark Magazine, has also had couple of stories, including one about vikings and draugr and another about a space cop investigating a series of murders among workers on an alien world that leads him on a chase after a mad scientist. He’ll be contributing to our Eldritch Earth issue, as well.
Donald J. Uitvlugt has also taken off with a lot of our readers. His first story with us, Hour of the Rat, features a thief who unwittingly stumbles into the bloody struggle between a demon and a spirit of justice and retribution, whose present incarnations are a samurai lord and a ninja woman. Our winter issue has a story that’s sort of a spiritual sequel, but takes place on another planet.
James Hutchings is our one serialized contributor; we’ve been slowly publishing his long-form poem adaptation of Edgar Rice Burrough’s A Princess of Mars. The third installment will be included in the winter issue.

8 – Which artists have been involved in the magazine cover’s art?
Our primary cover artist is Jabari Weathers. He’s done covers for all three of our current issues and is finishing up work on issue 4. His stuff is simply fantastic.
The Hugo-nominated Spanish manga artist Ku Kuru Yo did a variant cover for our second issue. It features /V/ and Vivian James in homage to the iconic Frazetta cover for A Princess of Mars.

9 – Are you accepting submissions at the moment, and where can authors submit their manuscripts?
At the moment, we are taking submissions by invite only, as we are working with some of our current contributors to build their brands with us. Our next open submission period will be sometime in 2017.
Anyone interested in following and finding out when we’ll be reading again can check out our webpage at cirsova.wordpress.com or follow us on Twitter or Gab @cirsova.

10 – Where can we purchase the digital and print edition of the magazine?
All issues are currently available at Amazon.com in both digital and softcover edition.
We also have some really nice hardcover editions available through Lulu for serious collectors.

11 – Moving forwards, what are your plans for Cirsova Heroic Fantasy and Science Fiction Magazine?

We went pedal to the metal in 2016, putting out 5 issues worth of content across 4 issues. We’ve generated a lot of and positive press so far. While the temptation is to go full-steam ahead, we’re actually going to dial it back a notch in 2017; this will give us time to improve our offering and catch up on a lot of things we just haven’t had time or resources to do, like find a viable subscription service and establish ongoing advertising relationships. With the rush to get one issue out after another this year, we haven’t really had time to take care of a lot of stuff that would help us in the long run, but we really felt like we needed to make a statement in our first year.
2017 will see the Eldritch Earth issue in spring and another issue in fall that will feature several recurring characters. With any luck, it will see the follow up to Abraham Strongjohn’s At the Feet of Neptune’s Queen (fingers crossed for this one!), as well as more of Adrian Cole’s Dream Lords.
I’ll also be devoting some of my energies next year towards putting out a fully illustrated edition of Brackett’s early Eric John Stark novellas, so that will be taking up a chunk of my bandwidth.

P. Alexander is the editor for Cirsova Heroic Fantasy & Science Fiction Magazine. A dabbling writer and game developer, Alex blogs about gaming (both tabletop and video) and fiction at the Cirsova weblog. He is a regular columnist for Castalia House , where he reviews short stories from the 30s, 40s, and 50s and tries to convince people to stop whatever they’re doing and read Leigh Brackett. 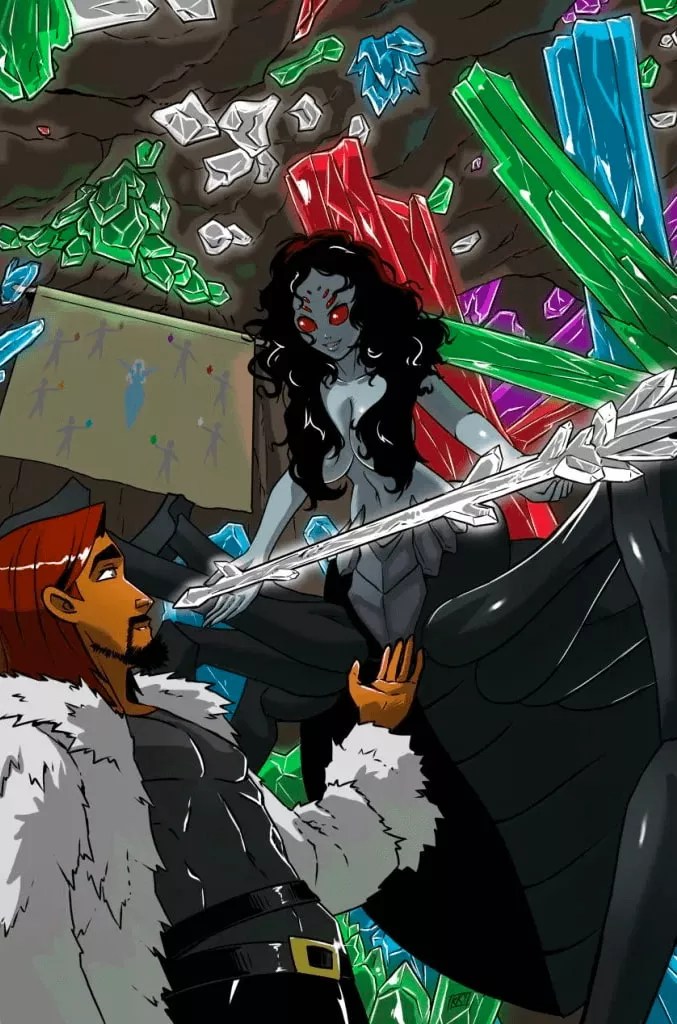 Novelette
The Wooing of Etroklos, by J. Comer

War in a Way that Suits You, by Michael A. Michaels
The Lion’s Share, by J.D. Brink
Blood and Bones: Caribbean 1645, by Jim Breyfogle
The Mad God’s Scepter, by Edward McDermott
The End of the Golden Age, by Tyler Young
Othan, Liberator, by Kurt Magnus
The Space Witch, by Schuyler Hernstrom
Clock’s Watch, by Michael Reyes


Essay Retrospective: The Best of C.L. Moore, by Jeffro Johnson