I was super excited when I found out that Jesse Baruffi had released three bonus epilogues for ‘Otto Von Trapezoid And The Empress of Thieves‘ (you can read my review of the book here). I couldn’t wait to read more about Otto and his ‘friends’.

And the best is that you can read these for free too! Jesse has posted the three epilogues on his Facebook page and Wattpad profile. Of course, you should read the book first – what are you waiting for?

I am rating 3.5 stars overall for the three epilogues, you can read my review below. As you know, I tend to struggle when reviewing short stories, in order to not give much away, so I hope you enjoy my short comments.

Epilogue One: Requiem for a Twine

Epilogue One: Requiem for a Twine: At the record-shattering Twine-Aid concert, we learn the fates of Licky Handleman and the Sisters of Norwegian Literature.

“As a token of my appreciation, this week I am going to be releasing three short stories for free online. All three serve as epilogues to the book, as codas to the minor characters who didn’t quite have their tales resolved by the end of the book, or for whom I just thought more info would be amusing and interesting. I’ll be posting them here, as well as on my Wattpad page and my personal website.”

While it was interesting and amusing indeed to follow the adventures of Licky Handleman and the Sisters of Norwegian Literature, I would expect the first epilogue to be more connected to the end of the main novel. This is because after I’ve finished the book, I have to admit that I wanted to read (even) more of the main characters (not necessarily the protagonists), and I can imagine other readers feel the same. Still, this was an interesting episode, worth to read as perhaps a standalone story. If you are a fan of Jesse Baruffi’s style, you’ll still enjoy this. If you haven’t read Jesse Baruffi yet, this might be a good start!

Epilogue Two: The Further Adventures of the Talking Skull of Teddy Roosevelt

Epilogue Two: The Further Adventures of the Talking Skull of Teddy Roosevelt: In this intrepid tale, the former president’s skull puts his mettle to the test against another implacably evil appendage.

“Today I release the second story of the epilogues, which has a ridiculously long title and features a character mentioned only twice and I’m not sure anyone besides me finds funny. But nonetheless, enjoy, “The Further Adventures of the Talking Skull of Teddy Roosevelt.”

This story has a very particular tone – which I found interesting, but it’s yet another episode that doesn’t feature a main character of the book. This story was perhaps my least favorite of the three. The satire aspect of the book is very prominent in this one, and it has a bit of that ‘absurd nonsense’ that is so characteristic in the novel, but perhaps it was a bit overdone here.

Epilogue Three: Marooned: From the point of view of Tim the Necromancer, we see what has become of the cabal of villains Otto shot into space. Will they kill one another, or will another romance bloom?

“This one is probably my favorite of the three, as it deals with the fate of Tim the Necromancer, a character who will eventually have a whole novel devoted to him, not to mention the return of several other villains from the story. Obviously, I never get enough of writing Lord Ironmask, but it was nice to check in on all of them. There’s also a surprise visitor, who unintentionally became another of my favorites and wormed their way into more of the tale than intended.”

This is my favorite of the three. You have to love these villains! This epilogue does sound as some sort of prologue at the same time – if this makes sense. It has that characteristic feel of ‘This is just the beginning’. I was happy to know that Jesse Baruffi intends to devote a novel to Necromancer because Tim is an awesome character. I hope to read more of Tim and the ‘girl’ ( which girl? read the epilogue if you want to know more).

Jesse Baruffi was born in a West Virginia college and quickly became the adorable dorm mascot of his parents’ alma mater. While other little boys dreamed of being astronauts and firemen, Jesse dreamed of creating stories, a curse which failed to subside, even in adulthood. He has been a teacher, tutor, caseworker, cat rescuer, filmmaker, and accidental kite-flying champion. He currently resides in Chattanooga, Tennessee with two demanding feline overlords. Otto Von Trapezoid and the Empress of Thieves is his first novel.

OTTO VON TRAPEZOID AND THE EMPRESS OF THIEVES is the story of two criminal masterminds who can conquer anything except their own feelings. Otto Von Trapezoid is a mad scientist who rules an army of robots from his orbital space station. Angry and grumpy, he sees no value in humanity except becoming their ruler. Esmerelda Santa Monica is the stylish self-proclaimed “Empress of Thieves,” who values her own legend and the thrill of the theft over actual wealth. Both live lonely lives, the desire to become the greatest villains of all time primarily on their minds

When the two meet in simultaneous attempts to blackmail the UN, their instincts are to attempt to kill one another, but soon they discover a mutual attraction that neither thought possible. Once they begin to pool their resources, the pair seems on track to become the most successful evil-doers of all time and set out to conquer the world itself. But what happens when their villainous natures emerge, and both realize there can only be one absolute ruler of Earth? Can either be satisfied with being second to another?

To make matters worse, they must deal with the protestations of Otto’s sidekick robot SCRAP, the meddling of their fellow villains, their families, and worst of all, heroic superspy Jake Indestructible is determined to bring them both down, once and for all.

Filled with robot dinosaurs, exploding dinner parties, and villainous poker games, OTTO VON TRAPEZOID AND THE EMPRESS OF THIEVES is a hilarious sci-fi comedy that will leave you falling in love with the bad guys!
Buy the book: 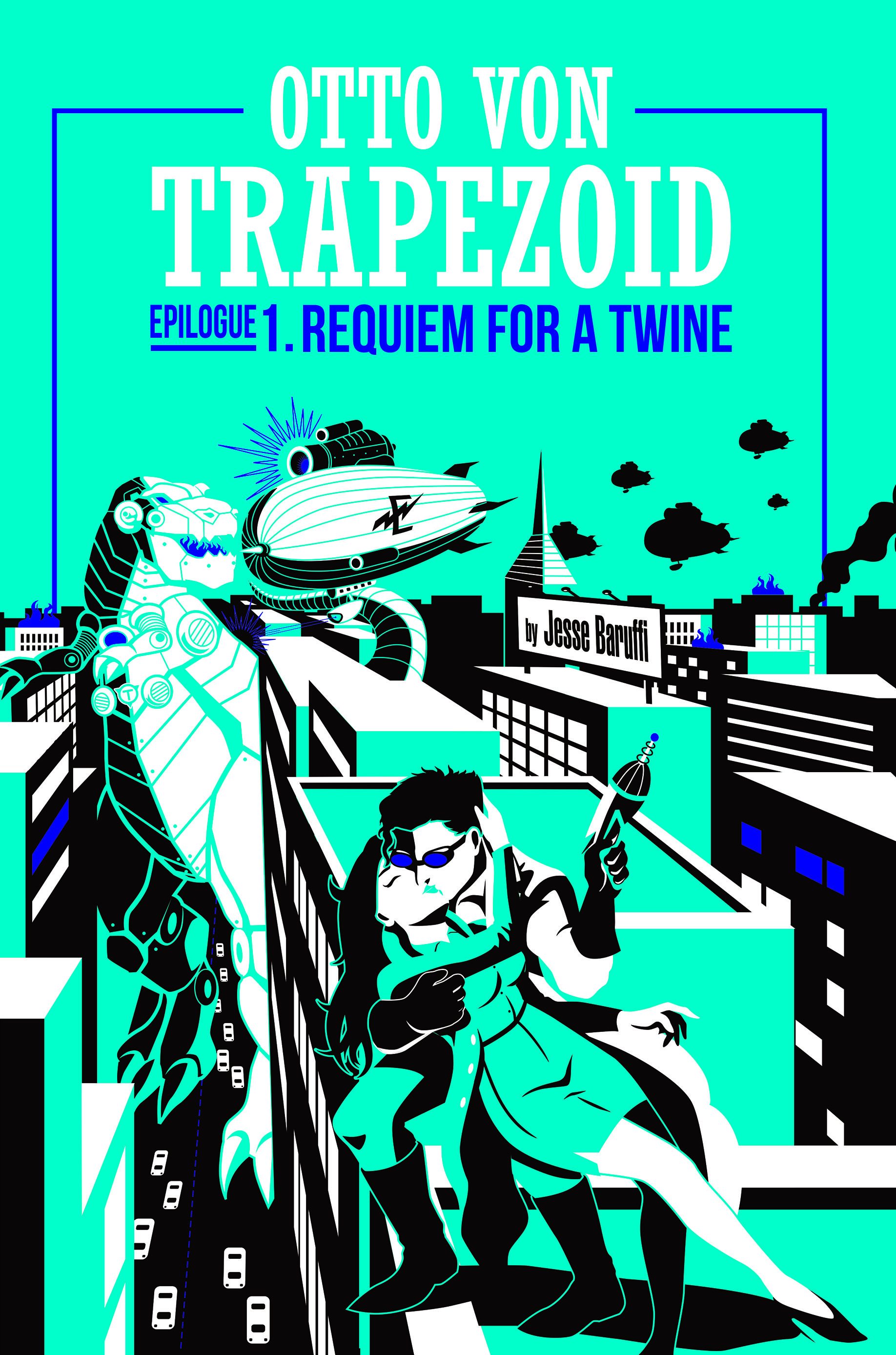