Otto Von Trapezoid and the Empress of Thieves – Jesse Baruffi

Thank you very much to the publisher for offering me a free copy of this book to review. This awesome sci-fi comedy gets 4 stars from me, so keep reading if you want to find out why.

So the basic premise is simple: The two biggest villains in the world fall in love. They both have evil plans, so imagine a sort of partnership. What can go wrong? (Or better yet, what can go right?)
Overall, this book combines a refreshing simplicity that you can find in a cartoon (think villains that want to take over the world) and a complexity of a well-developed satire. Many aspects of our society are satirized, and typical cartoonish roles are stereotyped: The hero, the villain, etc.
You’ll get loads of action and many hilarious scenes. It does feel a bit ‘episodic’ at times, until the major plot is revealed. But in the end, you’ll feel as if everything made sense (somehow). The whole thing does feel a bit like a parody with its few “weird” moments – But I do like weird, and I liked this.

How likable can villains be? You definitely have to read this book if you want to find out. Our main protagonists are mostly selfish and self-centered, so why would you like them? Simple, because they are human. And why do they feel human? Because they feel love. It’s as simple as this. Surely, Otto and Esmerelda cannot be that bad, if they care about each other. . . can they? And the fact that they remain villains, never abandoning their same evil plans and schemes, only makes them more fun. At some point, you find yourself rooting for the villains (no kidding). But please, do not interpret this as they are immutable or don’t change: These characters are well developed and will grow with the narrative.
Oh, but there’s also our almost-typical hero: Jake Indestructible. You will like him too. And there’s the villainess’s best friend! And the scientist’s best robot friend that you will want as your personal pet. Oh, and . . . Ok, I will stop. I just really wanted to make clear how awesome the characters are.

In this third person narrative, we have an overall omniscient narrator who is strategically placed in different settings, and reveals the characters’ thoughts as he sees fit – This only becomes obvious at a certain point because in the beginning I thought the author was going to provide us with different POVs. Well, even without the use of limited POV, the characterization was very well done, each character very well defined by actions, mannerisms, and voice.
The author does tend to be matter-of-factly in a few instances, and this includes the occasional ‘bookisms’, ‘emotions in the eyes’, and ‘dialogue attribution’. Despite this, the hilarious storyline still seemed to flow nicely and grab my attention. A few transitions in time / action passages are very rhythmic by using a very characteristic structure which adds a bit of a comic vibe. Example: “After sliding, kicking, dodging, maneuvering, parkouring, leaping, squeezing, sabotaging, nearly exploding, …”
The creative use of acronyms was rather amusing and smart too. Even if the writing style isn’t what I’d rate higher, is appropriate enough for the narrative.

Jesse Baruffi was born in a West Virginia college and quickly became the adorable dorm mascot of his parents’ alma mater. While other little boys dreamed of being astronauts and firemen, Jesse dreamed of creating stories, a curse which failed to subside, even in adulthood. He has been a teacher, tutor, caseworker, cat rescuer, filmmaker, and accidental kite-flying champion. He currently resides in Chattanooga, Tennessee with two demanding feline overlords. Otto Von Trapezoid and the Empress of Thieves is his first novel.
Find Jesse Baruffi Online:
Facebook | Goodreads


OTTO VON TRAPEZOID AND THE EMPRESS OF THIEVES is the story of two criminal masterminds who can conquer anything except their own feelings. Otto Von Trapezoid is a mad scientist who rules an army of robots from his orbital space station. Angry and grumpy, he sees no value in humanity except becoming their ruler. Esmerelda Santa Monica is the stylish self-proclaimed “Empress of Thieves,” who values her own legend and the thrill of the theft over actual wealth. Both live lonely lives, the desire to become the greatest villains of all time primarily on their minds

When the two meet in simultaneous attempts to blackmail the UN, their instincts are to attempt to kill one another, but soon they discover a mutual attraction that neither thought possible. Once they begin to pool their resources, the pair seems on track to become the most successful evil-doers of all time and set out to conquer the world itself. But what happens when their villainous natures emerge, and both realize there can only be one absolute ruler of Earth? Can either be satisfied with being second to another?

To make matters worse, they must deal with the protestations of Otto’s sidekick robot SCRAP, the meddling of their fellow villains, their families, and worst of all, heroic superspy Jake Indestructible is determined to bring them both down, once and for all.

Filled with robot dinosaurs, exploding dinner parties, and villainous poker games, OTTO VON TRAPEZOID AND THE EMPRESS OF THIEVES is a hilarious sci-fi comedy that will leave you falling in love with the bad guys! 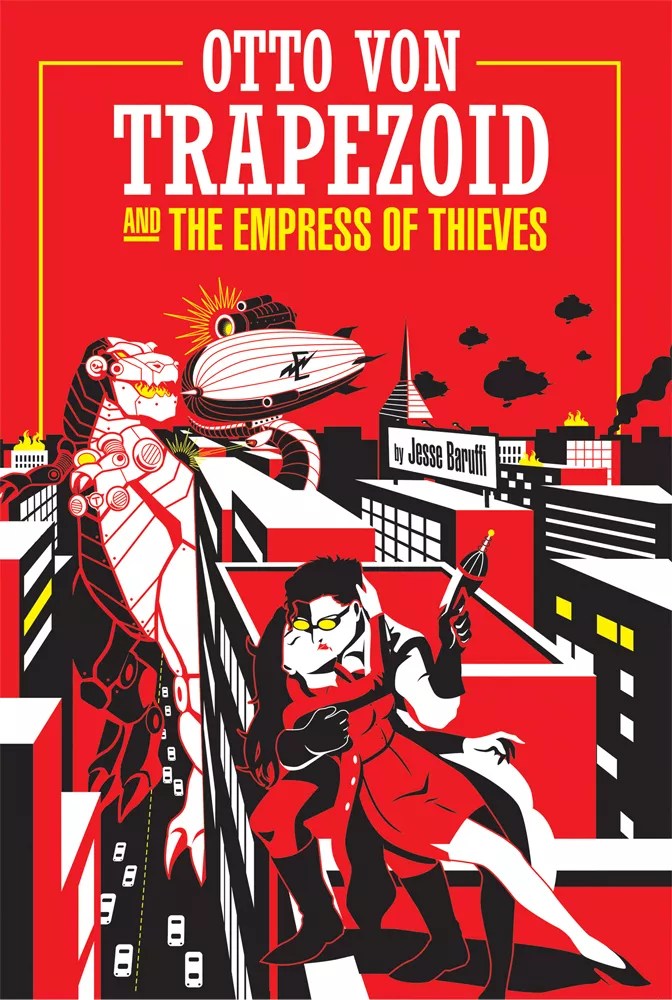 “There was a skyness to the sky and a nowness to

“If I can't suck your milkshake through a straw,

“Life will break you. Nobody can protect you fro

“If you run on lies long enough, they become you